Digital downloads are available through Bandcamp.

Cover Photo: The Cisco Store in Cisco Utah.  Taken October 2012 by Jenine Abarbanel while driving from Cisco to Moab. 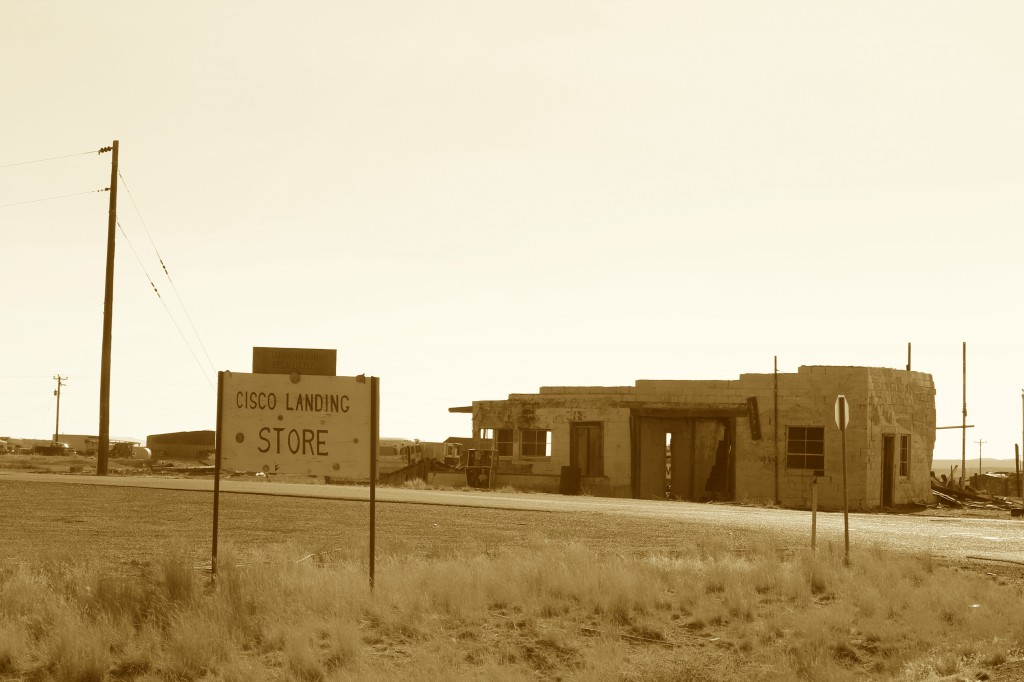 Jenine: Vocals and bass. Garry: Mandolin. Nat: Banjo. Barry: Guitar.
This was Jenine’s favourite Bluegrass song for a long time before someone pointed out it wasn’t technically bluegrass with it’s percussion-laden rendition on “Traveler.”  That didn’t stop it from becoming one of our favourite songs of all time to play, even if it still isn’t quite bluegrass.

We play it in the key of A, something like this:

Summer days are longer, I’m still waiting for your call
Left hanging like a promise, like summer leaves the fall
Sometimes she’s a stranger, sometimes she’s my friend
But people change, turn the page again

The car is packed and runnin’, my heart is racin’ fast
Kiss you just one more time and hope it’s not my last
The past will be a stranger, the future is my new friend
So let it change, turn the page again

Jenine: Vocals and bass. Garry: Vocals and mandolin. Nat: Banjo. Barry: Guitar.
First recorded by José Feliciano in 1968, and made famous by Joe Cocker in 1969, this song was recorded by another handful of bands in the following 3 years, then left to languish until Claire Lynch remodelled and revived it in 1997.  This song was on the mix tape Barry first gave Jenine to introduce her to Bluegrass, and one of the first songs we started playing.  Even after 6 years, it’s still challenging and fun.

Two train tickets to L.A.
One round trip the other one way
I make my bed where the feather falls
I start to move when forever calls
And I start runnin’

3. What Does the Deep Sea Say (Traditional)

Jenine: Vocals and bass. Garry: Vocals and guitar. Nat: Mandolin. Barry: Guitar.
This traditional and oft recorded Irish tune has long been a favourite amongst the fishing and sailing communities in and around Leigh.  You’d think it would bother them that it doesn’t end well for the “Sailor Boy.”

We play it in the key of A. That chord at the end of the third line is a Bm. 🙂

Please tell me deep blue sea
Is he sleeping peacefully?
The wind from the north is blowing icy cold
Please keep him warm for me 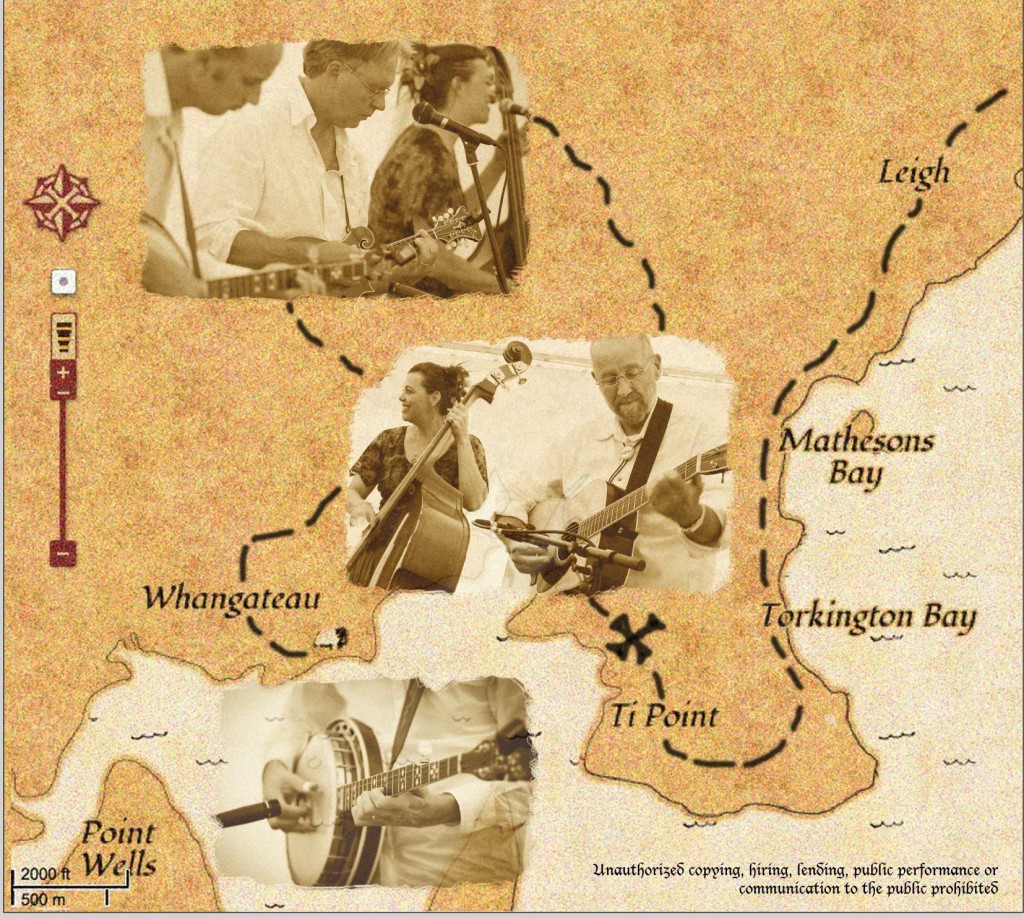 In the arid canyon country of Eastern Utah, there’s a lonely road that winds along the Colorado River.  It’s a landscape full of drama and menace.  And when we think of it, it sounds a bit like this.

This tune is released under a Creative Commons License, attribution, share-alike.

We liked this song from the first time we heard it, but knew we could never replicate what Welch and Rawlings had created, so we didn’t spend a whole lot of time learning it as written.  Instead we passed it around again and again until something that sounded like us came out of it.  We hope we didn’t ruin your favourite song.

We play it in Am.  The turn around is Am F G Am

ANNABELLE (Am) Gillian Welch
Intro: (Am)

CHORUS:
We (F) cannot have all things to (C) please us

I had a daughter, (F) called her Annabelle
(E7) She’s the apple of my (Am) eye
Tried to give her something like (F) I never had (E7) Didn’t want to ever hear her (Am) cry CHORUS

6. With a Memory Like Mine (Wayne Scott, Darryl Scott)

This song exactly captures the unparalleled anguish of the parent who has lost their child in war. It’s the saddest song we’ve ever heard, but the power and emotion of the melody and music is just irresistible.

He was returned just one year later
But, I’ll not forget that day
The baggage car is where he traveled
In a casket where he lay

[F] Train man, keep your whistle blowing
Make it [Ab] moan and make it [Gm] whine
[F] You make a man feel mighty lonesome
With a [Gm] memo[F]ry like [Eb] mine

I couldn’t stand it any longer
And I knew not how to pray
I cried, “My god, I hate to leave him
All alone beneath that clay”

Lord, if I could I’d trade places
I would gladly give my all
I’d wrap that flag around me like a blanket
And listen for the bombs to fall

Made famous by Maura O’Connell in the 1970s, this song has seen a resurgence in popularity over the last five years, including a new recording by Cheryl herself with an added bridge and slightly different arrangement.  But it’s too late for us, Maura’s will always be THE song.  This song is dedicated to our good friends Pam and Neil.

We do this in Gm, Maura does it in Em, which is what I wish we did it in as well. Oh well, too late to change now!

Cryin’ who’s your partner, who’s your darlin’, who’s your baby now?
Who wakes up at night to pull you in?
It don’t matter, you’d just make her lonely anyhow
Don’t know why you even try to win 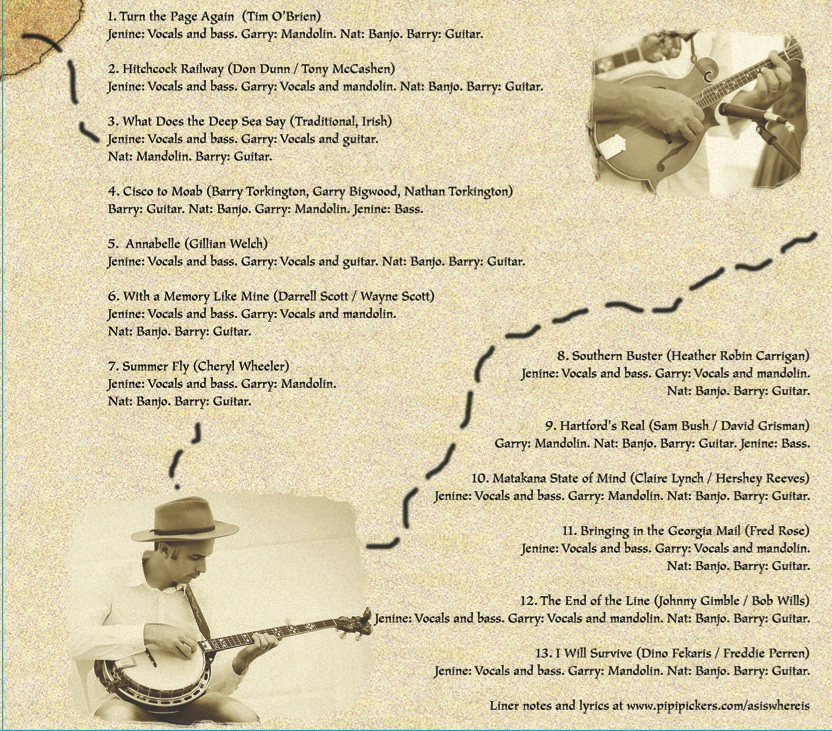 Written by a dear dear friend of ours, singer/songwriter extraordinaire Heather Robin Carrigan.  She writes great bluegrass songs that sound 50 years old, but are distinctly original. This is a great break-up song and Jenine would like to dedicate it to Gretchen and Amy.

You thought you could bully me to stay
But you’re a cryin’ fool, ’cause I’m walkin’ away
I won’t look back and I won’t turn around
Every step I make takes me to the higher ground

You can talk about how I done you wrong
But it won’t help you honey, ’cause I’m already gone
You just go on home and settle down
It’s already over and I’m halfway outta town

Garry found this gem buried in an obscure collection of Bush/Grisman instrumentals. He and Barry bashed the heck out of it in their infamous “shed sessions” and it quickly became one of our favourites.

Another song off that first mix tape, Claire Lynch’s “Alabama State of Mind” translated well to our local community, and the Farmer’s Market we play so often in Matakana.

Alabama (Matakana) State of Mind (A)

And on a lazy summer Sunday, after church
Kinfolk come around and visit for a while
And I can almost taste what’s on my plate
Sunday dinner served up southern style

And if you catch me in a daydream you will know that I’m
In that Matakana state of mind.

Our favourite of all the train songs.

[A] See that engine puffin’, boy she’s makin’ time
That old train is wearin’ out the [E] rail, rail, rail
[A] Headin’ for the mountains that she’s got to climb
Bringin’ In The [E] Georgia [A] Mail

Ninety miles an hour and she’s gainin’ speed
Listen to the whistle moan and wail, wail, wail
Has she got the power, I’ll say, yes indeed
Bringin’ In The Georgia Mail

See them driver’s travel, watch her sand the track
Ought to put that engineer in jail, jail, jail
Has he got her rollin’, watch her ball the jack
Bringin’ In The Georgia Mail

Curbin’ for the Depot, listen to her scream
Bringin’ In The Georgia Mail

We have to thank Red Molly for introducing us to the joy that is Bob Wills and his Texas Playboys.  This is the most fun song to play. It never does seem to last long enough!

Jenine: Vocals and bass. Garry: Mandolin. Nat: Banjo. Barry: Guitar. Who would know that Gloria Gaynor’s anthem of female power was also the best banjo tune ever written?  We hope that everyone does now. Thanks to Meredith Tanner for giving Nat the idea he wanted to banjo up this song way back in 1996. 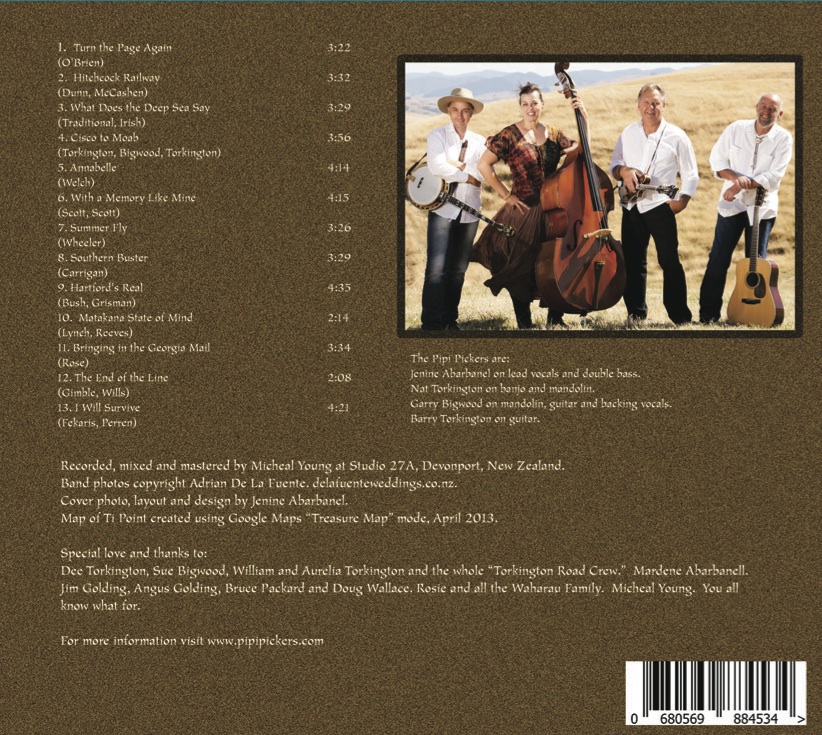